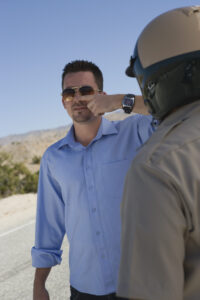 To attempt to determine whether a suspect is intoxicated, police officers may sometimes conduct what is known as a field sobriety test. A police officer in North Carolina must have probable cause to make an arrest for DUI – driving under the influence. In establishing probable cause for a DUI arrest officers frequently consider the suspect’s performance of Standardized Field Sobriety Tests. The US National Highway Traffic Safety Administration (NHTSA) has established a standard battery of three roadside tests that are recommended to be administered in a standardized manner in making this arrest decision. The first test typically administered is the Horizontal Gaze Nystagmus test. When this test is conducted the officer is looking for the involuntary jerking of the suspect’s eyes. The second test administered is the Walk and Turn (WAT) test. This test is a divided attention test and also measures balance. It requires the suspect to walk heel-to-toe on a line along with other instructions. The final test is the One Leg Stand (OLS). The OLS test requires the suspect to stand on one leg for 30 seconds and also measures balance, coordination, and similar to the WAT test, divides the suspect’s attention.